[/vc_column_text][vc_column_text]In honor of the 2016 Olympic year, Coach O wants to encourage youth track & field athletes to “Go4Gold” in competition.  Going for Gold means more than just winning first place, it symbolizes youth athletes doing their best and never giving up.  Coach O has always been a big believer in “Going 4 Gold.”  As a former athlete, Coach O was a 400m specialist and standout at Troy (State) University.  He excelled at the event and participated in both the 1976 and 1980 Olympic Trials advancing to the finals each time placing 8th and 7th respectively. This same mentality has transferred into his Coaching and business endeavors. He’s won National Championships as a coach and administrator with the University of Tennessee’s track team and runs a successful business that prides itself in providing a number of track & field solutions to its customers. Whether it’s taking first place in a competition, earning a personal or season’s best, conquering a new skill, overcoming injury or achieving a new fitness goal – remember to “Go4Gold” throughout this competition season. 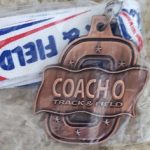 gging it on your favorite social media network using the hashtag #iGo4Gold or by sending to dave@coacho.com.  We’ll post the best images in our Go4Gold gallery to honor your winning spirit and inspire others.  Plus, several lucky participants will receive a special Coach O gift bag at the end of the summer which will include a custom Coach O gold medal!

We have closed submissions for the 2016 #iGo4Gold campaign.

Winners will be announced soon!